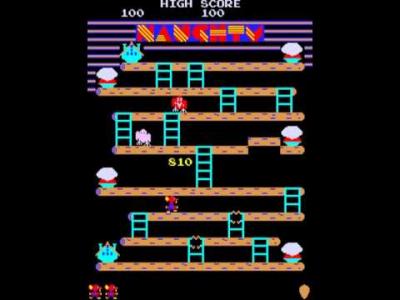 Naughty Mouse, also known as Woodpecker, is a platform arcade game that had been released by Amenip Corporation in 1981; it runs upon Namco's Pac-Man hardware (a Zilog Z80, running at 3.072 MHz), with one of Namco's programmable sound generators running at 96 KHz for audio. The player must use a 4-way joystick, to take control of the eponymous Naughty Mouse, who must make it from his own house (at the bottom of the screen) to his girlfriend's (at the top) - however there are several differently-coloured woodpeckers that hatch from the large eggs positioned on the left and right sides of the screen, and set out to stop him, but the player has a single button with which to make Naughty Mouse jump over them. Some of the ladders may also become "electrified" after Naughty Mouse has climbed them, forbidding him to go back down them again on pain of death; once he has reached his girlfriend's house, he will receive the stage's remaining time as bonus points and proceed to the next stage. The main difference between the two versions is the colour palettes, and stage arrangements.