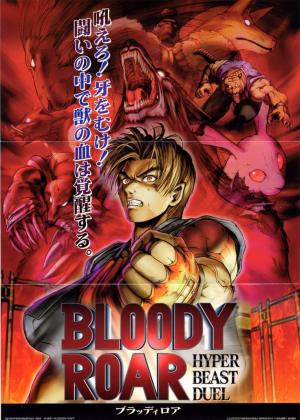 Bloody Roar (ブラッディロア Buraddi Roa?), known as Bloody Roar: Hyper Beast Duel in Europe and Japan, is a fighting video game originally developed by Raizing (now Eighting) as an arcade game. It was later adapted for the PlayStation by Hudson Soft and published by Sony Computer Entertainment for the PlayStation. The arcade version was released on July 7, 1997 and was titled Beastorizer in North America. The PlayStation version was released in Japan on November 6, 1997, in North America (under the title Bloody Roar) on October 31, 1997 and in Europe on March 1998. Bloody Roar is the first game in the Bloody Roar video game series and was followed by four sequels on multiple platforms. The game's story centers on a group of warriors known as "zoanthropes", who have the power to transform into half-human half-animal "Beasts", and the Tylon Corporation, and underground organization that seeks to use zoanthropes as mind-controlled weapons. The game received generally positive reviews from critics for its originality and graphics, while the audio received mixed opinions. The game's success resulted in its re-release for The Best range on October 14, 1999. The game was re-released on the PlayStation Network in North America on August 20, 2009.