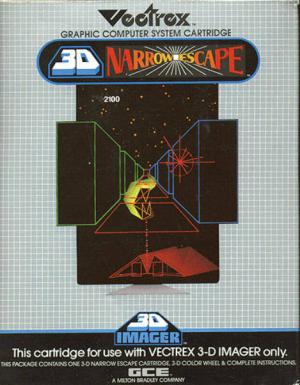 The goal in Narrow Escape is to successfully navigate a ship through the narrow, fast-moving passages of the warlord's fortress, destroy the defense forces and avoid space debris. The player's ship must also be maneuvered through small holes in a series of walls where fuel cells can be picked up to restore the ship's constantly decreasing fuel supply. If the player pilots their ship successfully, they will be faced with the warlord's own escape ship which must be hit several times to be destroyed, liberating the star system from the warlord's tyranny. Each level becomes more difficult as everything will move faster, fuel will be consumed more quickly, the holes in the walls will become smaller, and more menacing defense forces will appear. Each level of game play consists of two phases: 1. Passages: During the first phase of each level, the player must maneuver their ship through the narrow, moving passages with the joystick while shooting six of the warlord's defense forces with button 4. If any of the six are missed, they will go off-screen and be recycled to give the player another chance, but more fuel will be used. In addition to various defense forces which must be destroyed, there are extra targets that can be shot for additional points. Unlike the regular defense forces, the extra targets are non-threatening in that they will not shoot or crash into the player's ship. During this phase, space debris will also be shooting up through the play field. Space debris cannot be shot and can only be avoided by dodging it by moving from side to side. The walls of the narrow passage are also a danger to the player. If the player's ship crashes into a wall, a life will be lost. There are gaps between the moving walls which the player can maneuver quickly into and out of so as to avoid approaching enemies or space debris, however as game play becomes faster this will present a higher risk to crashing into oncoming walls. 2. Walls: If the passages are successfully navigated and the the required six defense forces are destroyed, the player will enter the second phase. This is a series of walls with holes. In the first level of the game, there are five successive walls, each with one hole through which the player must maneuver their ship. In the second level of play, there will be six successive walls, in the third level, seven walls, etc. Also the size of the holes will become smaller in each new level. The hole will be in a different location on each wall. After passing through the hole in each wall (but prior to entering the hole in the next wall) there will be a fuel cell which must be passed to pick up. If the fuel cells are missed, the game will continue, but the fuel gauge will be continuously depleting. Note: in early levels of the game, all of the fuel cells will not need to be captured. However as the game progresses and fuel is consumed faster, all of the fuel cells will need to be captured in order to make it through the next level. After successfully completing three levels of play, the player will come face-to-face with the warlord's escape ship in open space. The warlord's ship must be shot five times to be destroyed during the first encounter, seven times on the next encounter, nine times the next, etc. The warlord's ship will shoot torpedoes at the player's ship, which can be either avoided or shot at to be destroyed. If the warlord's escape ship is destroyed, the player will enter the next level of play and the game will continue.