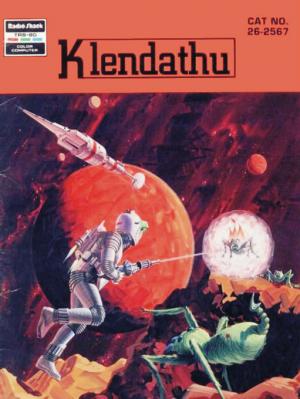 Based on Robert A. Heinlein's Hugo-award winning book, Starship Troopers, this game simulates the brief combat life in M.I. (Mobile Infantry) far in the future. The Terran Federation is locked in a deadly war with "the Bugs," and has announced "Operation Bughouse," an attack directly on the Bugs' home world of Klendathu. Equipped with a state-of-the-art power suit, you drop in from orbit and and torch as many Bug warriors as possible, then bounce back out before your suit runs out of energy or the Bugs overwhelm you. Survive three drops and you can retire, with pay based on how many Bugs of each rank you blasted. Game play consists of carefully selecting which block of the drop zone to land in, and then blasting the warrior and queen Bugs as they advance down the screen toward you. For each warrior and queen you might see, however, there are many more harmless worker Bugs, which look exactly like the warriors. They're all swarming toward you; choose your targets carefully and don't waste your ammo. You'll know the warriors because they're the ones shooting at you.