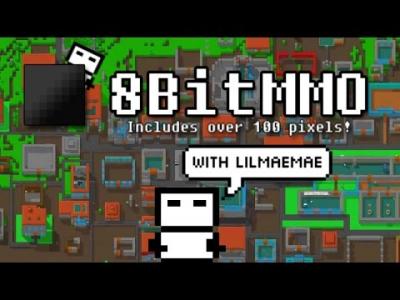 8BitMMO is a retro-style 2D massively multiplayer game! It's a giant construction sandbox -- you can build a home or a castle in a persistent streaming world. Found and manage your own city. Fight evil LawyerCats and engage in Player vs Player battle. Features 100% Player Built World - The entire world is built by players. Build your own house, town, voxelart, or dungeon. The world is massive -- there's plenty of space to build in, and it streams in as you explore (no load screens). Be the Mayor - Start your own town and invite your friends. You'll have an array of management tools for overseeing your town. Interactive Development - The entire game only has one full-time developer, and development is still ongoing. You can submit and vote on ideas -- many of the top voted ideas have been implemented into the game. Free updates with new content and features are frequently released. Anti-Griefing Systems - Several systems protect players from griefing. Free To Play - No purchase necessary to have fun. Support the developer and buy a fancy hat... or don't. (Premium items give NO competitive advantage) Customize your Character - Wear hats, clothing, accessories, change your skin color Become a Zombie - Want to be a zombie? You can! But you'll need a steady supply of delicious brains from other players. Don't worry, after you eat their brain, they'll be zombies too! Fight Nefarious Enemies - Congressional Lobbyist Slugs, LawyerCats, and Hipsters oh my. MegaMap - The world is huge, so the MegaMap interface (based on Google Maps API) is a handy way to browse the world and share your creations with friends. Music - Enjoy chiptune from legendary artists Danimal Cannon, Zef, PROTODOME, and Honin Myo Audio.