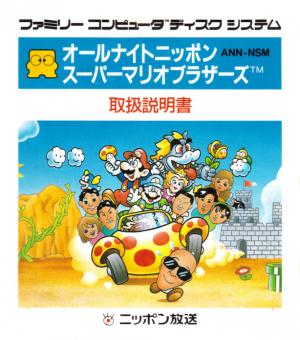 An officially licensed retool of Super Mario Bros., released in 1986 for the Famicom Disk System. This version is based on the Japanese radio program All Night Nippon, and it was given out as a raffle prize on the show itself. The game was published by Fuji Television. Essentially, this game is an exact replica of the original, except with the sprites of the Toads and various enemies replaced with Japanese celebrities for a humorous effect.