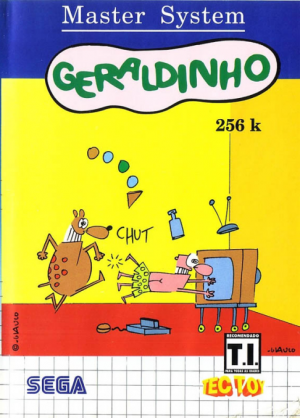 Geraldinho is a retooled version of Teddy Boy, produced by Tec Toy and released exclusively in Brazil. The main character was replaced by "Geraldinho", a popular comics character created by Glauco Villas Boas, a famous brazillian illustrator and cartoonist, for children's section of the newspaper "Folha de São Paulo" called "Folhinha". This game was another attempt of Tec Toy to suit the brazilian children audience, using characters from popular comics, series and magazines and, even though people generally don't have the game in their top lists, everyone in Brazil who lived in the 90's remembers of it with much affection.