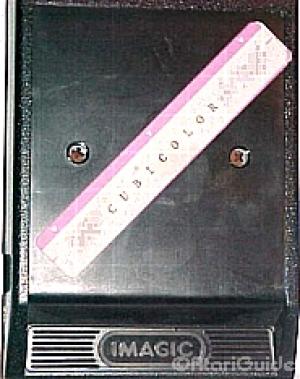 You know those cheap little tile puzzles, where you shift tiles one space at a time to try to reform a picture that has been mixed up? That's what this game is like. Move the tiles on the big square (5x5) one at a time, and try to form the pattern shown on one of the little squares (3x3) within the middle 9 tiles of the big square. The game is set up with two big squares for grueling two-player competition. Cubicolor was designed by Rob Fulop of Imagic fame. Supposedly, only 50 were produced, and each cartridge is numbered. The rarity and legend of this game make it potentially the most sought-after 2600 game in existence.