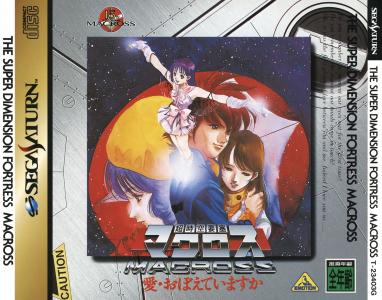 Also know as: The Super Dimension Fortress Macross: Do You Remember Love?

Choujikuu Yousai Macross: Ai Oboete Imasu ka (超時空要塞マクロス 愛・おぼえていますか) is a horizontally-scrolling shooter for the Sega Saturn released in Japan in 1997 that ties into the Macross franchise. In the game, the player takes the control of main protagonist Hikaru Ichijyo, as he battles Zentradi units on each stage. The format of the game is a 2D side-scrolling shooter (much like the original Macross game for the Nintendo Family Computer). The player has two basic attacks: Gun Pod and missiles. In addition, the VF-1 Valkyrie unit controlled by the player can transform into Fighter, Gerwalk and Battroid modes during battle.