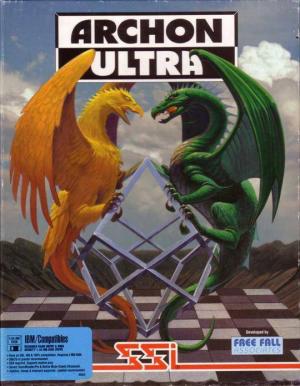 Archon Ultra is an action-strategy video game developed by Free Fall Associates and published by Strategic Simulations in 1994 for MS-DOS. It is a remake of the 1983 game Archon: The Light and the Dark. An expanded remake of the original game, it adds updated graphics and sound, but also includes additional features, most notably the units have secondary weapons and the battle sequences are shown from an isometric point of view to simulate a third dimension in the battles. It also featured a multiplayer mode via modem The goal of the game is either to take control of five power points located on the board, to eliminate all the opposing pieces, or to eliminate all but one remaining imprisoned piece of the opponent's. While the board is similar to a chessboard, and the various pieces are similarly designed to have various offsetting abilities, when one piece attempts to take another, the removal of the targeted piece is not automatic. Instead, the two pieces are placed into a full-screen 'combat arena' and must battle (action-style, with the players running the pieces) to determine who takes the square.