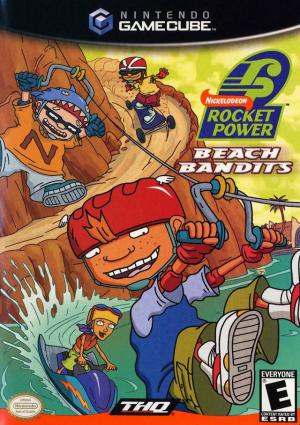 Rocket Power: Beach Bandits is a 2002 video game for the PlayStation 2, GameCube, and Game Boy Advance derived from the Nickelodeon cartoon Rocket Power. Plot[edit] The gang are just about to start their summer vacation when they realize all of the sand in Ocean Shores has been taken away by a mysterious criminal. After investigation, they find out a company called Golem Industries has stolen all of the sand and the gang decide to go about stopping them. They end up going to the lakes, where they discover that the water from there has also been stolen by Golem Industries. The water is found out to be used to ship electricity to a secret base. The gang end up destroying the water plants, and after a confrontation with the "Barramundi Bot", they return to Ocean Shores. They eventually arrive at "Wishing Waters", the location of the secret base, which is revealed to be a giant robot factory underneath a water park controlled by a sentient supercomputer. Sam hacks into the computer's programming to build a robot to destroy the base. After destroying most of the base, they come into contact with "Cyrax", the supercomputer controlling the factory. After Sam destroys all of Cyrax's computer chips with a skateboard, Cyrax promptly explodes and the gang gets away. After coming back to Ocean Shores for a second time, the gang challenges Lars to a downhill dirt track race, and after winning manage to convince Lars to give them the secret location to Golem Industries' headquarters. Once they make it inside the base, they find a massive earthquake machine that Golem Sr, the owner of Golem Industries is controlling. In the cutscene that follows, Golem turns the machine on, and after the base rumbles a pipe knocks into him, sending him into a pool of lava. Golem then comes out of the lava and is revealed to be a robot. The gang confront Golem and destroy him. After the gang returns to Ocean Shores for a final time, they find out that the mastermind behind the entire plan has been Eric Golem Jr, the alleged son of Golem Sr. He threatens to destroy all of Ocean Shores with a giant tsunami machine. In order to stop this, the gang challenges Eric to a final set of race challenges. After the third battle however, Eric quits the challenges and runs to the control room, prompting Otto to race him via hoverboard to get to the control room before he does. After winning, the base is destroyed. During the final scene, the gang forgives Eric for everything that he has done, and says that he should make some friends that are human.