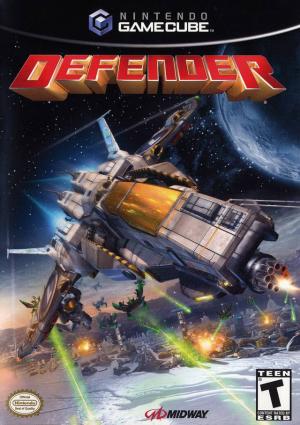 Defender is a shoot 'em up video game developed in October 2002 for the PlayStation 2, and ported to the Nintendo Gamecube and Xbox the following month. It is a remake of the 1981 game of the same name. Featuring three-dimensional (3D) graphics, the game is set on a fictional planet where the player must defeat waves of invading aliens while protecting astronauts. A separate version of the game was released for the Game Boy Advance. Despite sharing a name, box art and a release date with the console versions, it is a different game. Gameplay The player picks up humans, who are in danger from aliens, and brings them to a drop zone for extraction. The enemy landers are attacking them, and will constantly try to pick them up for themselves. Once a human is stolen, the player have a short amount of time to blast the lander and catch the slowly falling human. If the player fails to free the human, they are absorbed into the lander and the lander is transformed into a much more difficult enemy. The enemies are a handful of other alien craft, including some ground units that can turn humans into zombies.