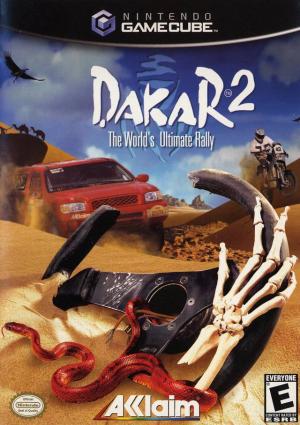 Dakar 2: The World's Ultimate Rally, or just simply Dakar 2, is a 2003 video game for Nintendo GameCube, PlayStation 2 and Xbox. It is the sequel to Paris-Dakar Rally on PlayStation 2 and is based on the real-life Paris Dakar Rally - one of the world's most difficult and dangerous sporting events. The game begins in rural Paris and ends on a beach in Dakar, Senegal, with 11 stages in between, including tracks in the Sahara Desert and Atlas Mountains.