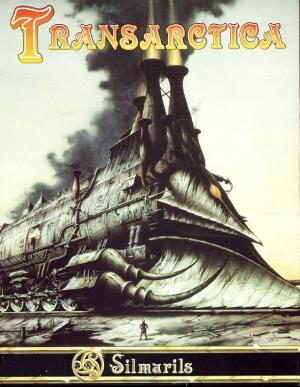 Transarctica (or Arctic Baron) is a 1993 computer game made by the French company Silmarils for the Amiga and ported to the PC, Atari ST, Macintosh and Atari Falcon. The story is based on the post-apocalyptic science fiction novel series La Compagnie des glaces by the French writer Georges-Jean Arnaud. In the 21st century, mankind is being ravaged by the greenhouse effect. A last-ditch effort to counteract it is designed and executed. It works far too well. Centuries if not millennia later, the planet is entirely covered in a thick, opaque cloud layer. Giant wolf packs roam the frozen wastes, and the mammoth has re-emerged from the elephant stock. Mankind ekes out a living in a few handfuls of settlements, connected by a network of massive armored trains. The network in turn is in the hands of the gargantuan Viking Union, which is merciless towards threats to its power. A few radicals, though, are willing to attempt a change, and managing to hijack a train of the Union, the Transarctica, they set out in search of the "sun".