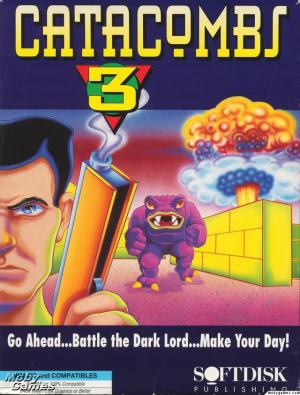 Catacomb 3-D is the third in the Catacomb series of video games, and the first of these games to feature 3D computer graphics. The game was originally published by Softdisk under the Gamer's Edge label, and is a first-person shooter with a dark fantasy setting. The player takes control of the high wizard Petton Everhail, descending into the catacomb of the Towne Cemetery to defeat the evil lich Nemesis and rescue his friend Grelminar. Catacomb 3-D is a landmark title in terms of first-person graphics. The game was released in November 1991 and is arguably the first example of the modern, character-based first-person shooter genre, or at least it was a direct ancestor to the games that popularized the genre. It was released for DOS with EGA graphics. The game introduced the concept of showing the player's hand in the three-dimensional viewpoint, and an enhanced version of its technology was later used for the more successful and well-known Wolfenstein 3D.