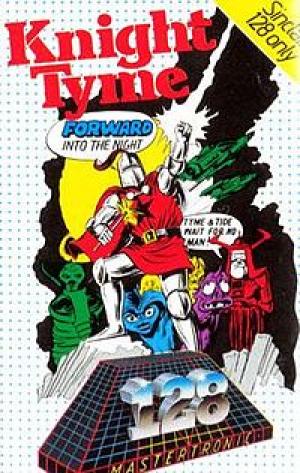 Knight Tyme is a computer game released for the ZX Spectrum, Amstrad CPC, Commodore 64 and MSX compatibles in 1986. It was published by Mastertronic as part of their Mastertronic Added Dimension label. Two versions of the ZX Spectrum release were published: a full version for the 128K Spectrum (which was published first) and a cut-down version for the 48K Spectrum that removed the music, some graphics and some locations (which was published later). It was programmed by David Jones and is the third game in the Magic Knight series. The in-game music was written by David Whittaker on the C64 version and Rob Hubbard on the Spectrum and Amstrad versions. Graphics were by Ray Owen. Having rescued his friend Gimbal from a self-inflicted white-out spell, the Magic Knight finds himself transported into the far future aboard the starship USS Pisces. Magic Knight must find a way back to his own time, with the help of the Tyme Guardians, before he is apprehended by the Paradox Police. On board the U.S.S. Pisces, the Magic Knight is first not recognized at all by the crew of the ship, and must create an ID Card, which he receives a template of from Derby IV, the ship's main computer. After getting his ID completed, he then takes command of the ship, first arriving at Starbase 1 to refuel the ship. After refueling, the Magic Knight collects the pieces of the Golden Sundial from Monopole, Retreat and Outpost. Returning to the ship with all the pieces of the sundial, he discovers that a time machine has appeared inside the USS Pisces to take him back to his own time.