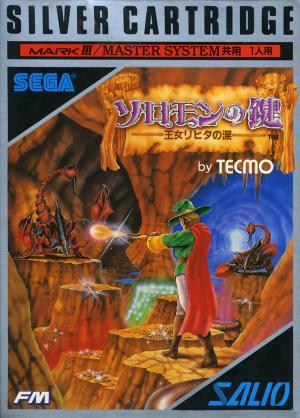 Solomon no Kagi: Oujo Rihita no Namida (ソロモンの鍵 王女リヒタの涙) is a platform-puzzle arcade game developed by Tecmo, which was subsequently brought to the Sega Master System by Salio in 1988. The game was brought to the west via other platforms as Solomon's Key, though the Master System version remained exclusive to Japan. The object of the game is get a key and then make your way to the exit. To achieve this, Solomon can create and destroy blocks, which can be used to trap enemies or as platforms. You and Dana, the wizard of Lyrac, must unlock Solomon's scroll of secrets to restore peace in the constellations. With Dana's magic, fire, and mystical powers, you will help release the imprisoned Princess of the Fairies and harness the evil forces within the constellations. But first, you need the key! Solomon's Key!