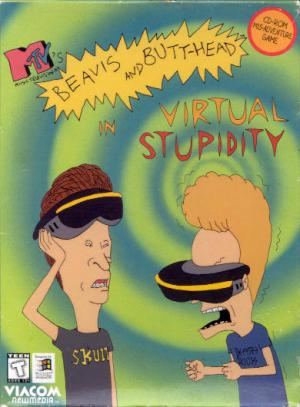 Beavis and Butt-head in Virtual Stupidity

Uh, huh huh, the joke is in your hands, huh huh. Like, why are you standing around in the store reading all these words when you could be home with me and Beavis , like, scoring and stuff. Uh, scoring with chicks, not me and Beavis. Plus you could be doing a bunch of other cool stuff, too, like messing with Anderson's mind, and, like, making Buzzcut's neck veins pop out, and just going around breaking stuff and kicking people's butts. And like, if you're as cool as me and Beavis, maybe you'll get into Todd's gang. So quit being a dillweed and buy this game and try to be cool for once, huh huh. It's like your only hope of leaving the store with dignity. Huh huh... dignity. * Explore the entire world of Beavis and Butt-Head * Includes 4 mini-games and 3 music videos * Features favorite show characters Todd, Daria, Van Driessen, Buzzcut, and Mr. McVicker, and many all-new characters * With voice talent by show creator Mike Judge, the actual voice of Beavis and Butt-Head * All new animation from MTV Animation Studios * Dialogue written by show writers Sam Johnson and Chris Marcil