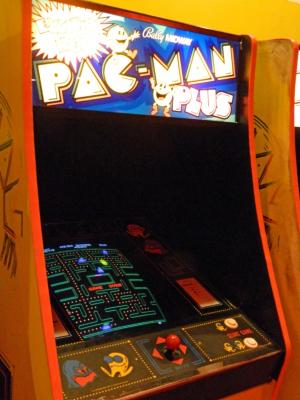 Pac-Man Plus is an action game, developed and published by Bally Midway, which was released in 1982. The gameplay in Pac-Man Plus is nearly identical to that of the original Pac-Man. The player controls Pac-Man, and attempts to score as many points as possible by eating all the Pac-Dots in the maze, while avoiding the four ghosts that chase him around the maze and will kill him if they catch him. Eating a Power Pellet will cause the ghosts to turn blue and become vulnerable for a short period of time, allowing Pac-Man to eat them for extra points. Once the maze has been cleared, it will be refilled as the gameplay continues. The most noticeable differences between the original game and Plus are various tweaks to the graphics: the maze is green instead of blue, vulnerable ghosts are shortened and have a leaf sticking out of them, the fruits have been replaced by new items (including a can of Coca-Cola) and the ghosts are now slightly cross-eyed. In addition to these cosmetic changes, Plus also changes the gameplay slightly: eating a bonus item will cause the ghosts to turn both vulnerable and invisible, and doubles their point value while they are vulnerable. Eating a Power Pellet also sometimes has unpredictable results, such as turning the maze invisible or turning only three of the four ghosts blue (the latter of which makes it impossible to clear a round by using a pattern). The ghosts are also faster and more aggressive than they were in the original Pac-Man, which makes the game seem overall faster-paced and more difficult by comparison.