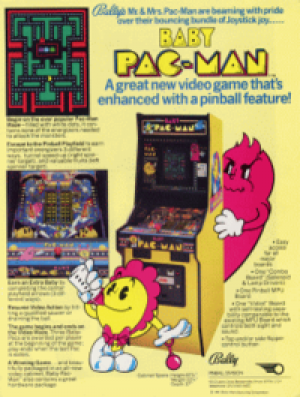 Baby Pac-Man is a hybrid arcade/pinball game released by Bally Midway on October 11, 1982. The cabinet consists of a 13-inch video screen seated above an elevated horizontal pinball game, and the combination fits into roughly the same size space as an upright arcade machine. The development of Baby Pac-Man was not authorized by Namco. It was designed and released entirely by Bally-Midway (as were Pac-Man Plus, Jr. Pac-Man, and Professor Pac-Man), which eventually led to Namco canceling its relationship with Bally-Midway.[1] 7,000 units were produced.[