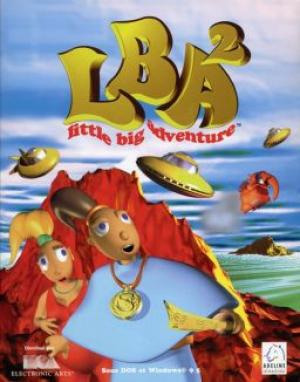 After Twinsen defeated FunFrock at the end of Little Big Adventure, Twinsun was peaceful, until a sudden storm covered Citadel Island. The Dino-Fly, a creature encountered in LBA 1 is struck by lightning and crashes in Twinsen and Zoe's garden. Twinsen seeks help from Ker'aooc, a healing wizard, who lives on Desert Island. But ferry crossings are cancelled. He aids Bersimon, the island's weather wizard, resulting in the clouds disappearing. After the storm, alien creatures, who call themselves Esmers, land on the planet, under a false diplomatic guise and Twinsen begins training under the Wizard's School after hearing of missing children on the planet. The Esmers use their army to secretly capture Twinsun's Children and openly invite the Wizards to their planet(which is revealed later to be a trap to capture them). After graduating as a Wizard, Twinsen is informed by his master of the possible plot of the Esmers and is sent to investigate their planet by accepting their invitation to all Wizards. Once Twinsen lands in Zeelich (the Esmers' two-layered, Jupiter-like gas home planet), the invitation proves to be a trap and he is arrested on the landing port. After tricking one of the guards with the help of another prisoner, Twinsen manages to escape imprisonment and escapes the planet in one of the ships. He eventually crashes in the mountains of Citadel Island, where he is attacked by an Esmerian soldier, after defeating him and making his way into the city he finds out that the Esmers have taken over the planet and have imposed martial law. After going home to check on Zoe he finds out that Baldino has left him a protopack (Prototype Jetpack; it can hover, not fly) in the warehouse, he retrieves it and sets out to find his friend. Once making it to Desert Island he finds out that Baldino has disappeared, he proceeds to investigate his house discovers that Baldino has built a spacecraft and for some reason went to Emerald Moon (Twinsun's moon), he also visits the Wizard's School and learns from his master that in order to proceed in his journey and face the Esmers, who prove to be more than he can handle. Home to several different species, Zeelich is a two-layered planet, the upper layer located above the sea of toxic gas that plagues the planet. The lower layer is located beneath the gas. Its inhabitants await the day when a certain prophecy will be fulfilled, and the Dark Monk, the shadow god, will emerge and restore Zeelich. Twinsen eventually gathers together four fragments making up a key which must be placed inside a little temple on Celebration Island. He unmasks Dark Monk, who is really FunFrock, the villain from the first game. He kills FunFrock, and returns to stop the moon of Twinsun crashing into the planet. 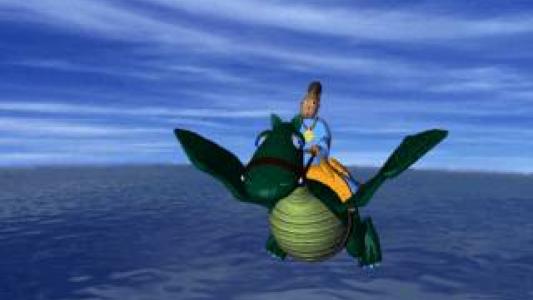