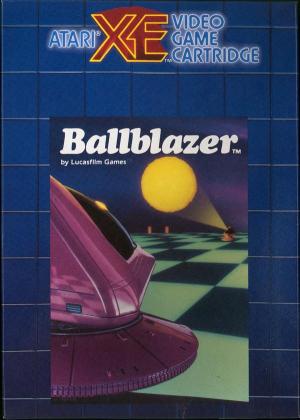 Ballblazer is a 1984 computer game created by Lucasfilm Games (later LucasArts Entertainment). It was originally released for the Atari 8-bit systems, such as the Atari 800 and the Atari 5200. It was also ported to other popular platforms of the day, such as the Apple II, ZX Spectrum (by Dalali Software Ltd), Amstrad CPC, Commodore 64, Atari 7800, and the NES. The Atari 800 version was called Ballblaster during development - pirated versions of the game went by this name as well.[2] The principal creator and programmer of Ballblazer was David Levine.[3] In 1990, LucasArts and Rainbow Arts released a remake and follow-up to this game, called Masterblazer. This game was released for the Amiga, Atari ST, and PC DOS. A similar game inspired by Ballblazer called Space Football: One on One was developed and released by Triffix for the Super NES in 1992. Years later on March 31, 1997, a remake of the original titled Ballblazer Champions was released for the Sony PlayStation.