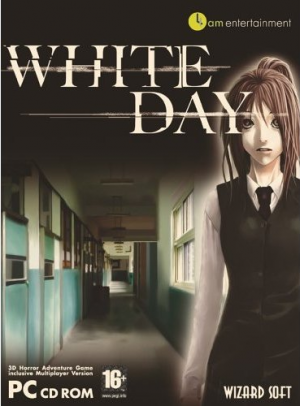 White Day: A Labyrinth Named School is the story of a young man's trip into school at the dead of night to deliver some candy in preparation for the Eastern holiday of the same name, White Day, to So-yeong, a girl at school he likes. Finding himself locked up soon after entering, escaping the school now becomes the main objective. GameplayEdit "White Day" is a first person survival horror with numerous adventure game elements and plot based on the ancient Chinese religious studies of Taosim (mainly Wu Xing, Feng Shui and Qi). You play the role as Hui-min, cooperating with So-yeong, Ji-hyeon, Seong-ah (who are also trapped in the school with you) to progress through the school and ultimately escape unharmed by the numerous threats that want you dead. There are 8 different endings you can get, each determining which girl you end up escaping with (or dying with, depending on the girl). Throughout the game, you're almost constantly being pursued by one of the two possessed janitors and other ghosts in the school that intend to kill you. One of the two janitors is first seen in chapter one from a ventilation shaft, beating an unknown school student to death with his bat and dragging him by the head through the stairwell door. Later on you encounter the other Janitor. When a Janitor finds you, he will blow his whistle and proceed to chase you wherever you go until you outrun him or lose him by hiding. If he catches up to you, he will repeatedly hit you with his bat until you are dead. The Janitor finds you much easier if you make loud noises (running, opening doors etc.) and whether you are hiding in the dark or light won't affect how easily you can be discovered as he wields a flashlight in his left hand at all times. Falling from a height, walking into ghosts or taking damage from other hazards will cause the screen to flash red and increase the rate of your heartbeat, which is heard in-game. Running for too long will make you tired and also increase the rate of your heartbeat. Soyabean Milk, Lunch Boxes and Coffee Cans can be obtained by inserting 500 won Coins in Vending Machines placed in hallways and rooms around the school, and can recover your stamina and health. PlotEdit The story begins on the day of March the 13th - the day before White Day and a day after Hui-min was transferred to Yon Do High School. Hui-min (the main character) makes plans to give a student called So-yeong candy for White Day. During a break in the school day, he finds So-yeong sitting on a bench near the school garden, and goes to give her candy. Suddenly, the wind blows the pages of the book she's reading and a photo lands at Hui-min's feet. It is a photo of So-yeong and her dead sister Na-yeong. He goes to pick it up, but So-yeong snatches it off him and Ji-hyeon appears standing by a tree waiting for So-yeong. So-yeong walks off with Ji-hyeon leaving her diary on the bench, so Hui-min decides to take the diary, planning to give it back to her along with the candy. With no time left, Hui-min goes back into school at 9:30pm (just after school) to leave it on her desk, not knowing that the school is locked up at 10:00pm. Somehow escaping the school now becomes a main objective. To Hui-min's surprise, he finds Seong-ah, Ji-hyeon and So-yeong are all at school too.