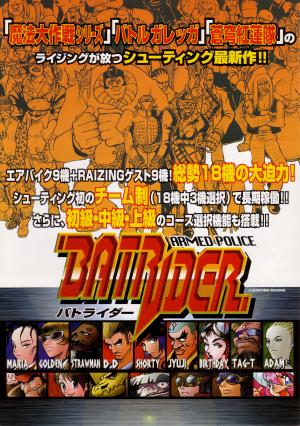 Armed Police Batrider (アームドポリス バトライダー?) is a vertically scrolling manic shooter arcade game developed and published by Raizing/Eighting in 1998. The player controls teams of flying jet bikes (Batriders) each with their own pilot; players can choose up to three of nine standard characters plus another nine unlockable characters from the previous Raizing games Mahou Daisakusen and Battle Garegga. Batrider contains up to seven stages along with a large number of secrets, which are either unlockable with codes or DIP switch settings, or hidden within the game itself.