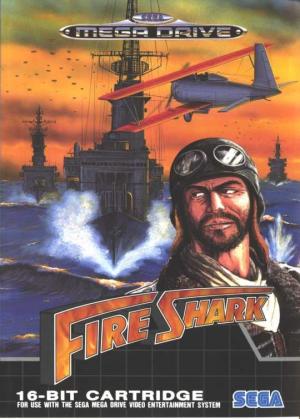 Fire Shark, released in Japan as Same! Same! Same! (鮫！鮫！鮫！), is a 1989 arcade shoot-'em-up by Toaplan ported to the Sega Mega Drive in 1990. This is one of the few Mega Drive ports developed by Toaplan themselves. Like many of the Mega Drive Toaplan ports, each regional release of the game contains multiple regional versions, of which European and US settings "Fire Shark" is slightly easier than Japan setting "鮫！鮫！鮫！". Unusually, the carts released in each region appear to be slightly different; actual differences are currently unknown. On an alternate Earth, heavy-arms producing nation S Corps starts invading other countries, and the Tiger Shark, a biplane, seems to be the only hope for stopping S Corps. There are three endings, depending on the difficulty level.