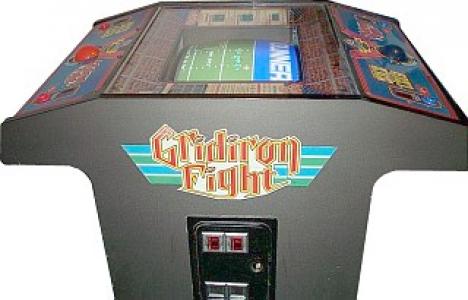 ehkan Gridiron Fight is a two-dimensional top-down scrolling American football game in which the player(s) control the virtual player on their team who is closest to the ball, with the trackball determining the speed and direction at which the player runs. A single push-button labeled "Kick" causes the virtual player in possession to release the ball with the same force and direction in which he is currently running. (This button is duplicated on either side of the trackball for left or right-handed players.) The Player 1 (red trackball) side contained two additional push-buttons for choosing between Single or Two-Player games. Before each play, players are invited to select from a variety of formations, e.g. "Sweep" or "Draw". The formation selected is displayed on a seven-segment LED on the player's control panel.