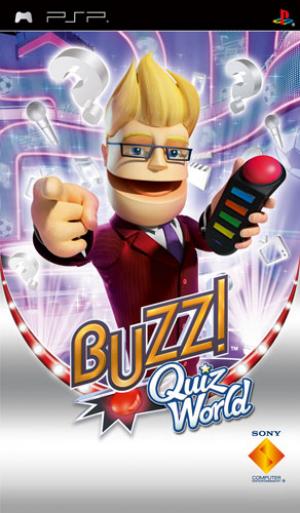 Buzz!: Quiz World, developed by Relentless Software, is the ninth game in the Buzz! series of quiz games. The game is available for PlayStation 3 and PlayStation Portable consoles. It allows users to use question packs purchased for previous Buzz! games as well as supporting user created content and online play. Unlike the previous PSP Buzz!, Buzz: Quiz World (PSP) supports DLC. As with all previous Buzz games the game is available in a game only (Solus) version or in a bundle which includes 4 wireless Buzz! Buzzers and a USB dongle for wireless connectivity (each dongle can connect 4 buzzers to the PlayStation 3). Quiz World features a mix of old and new round types. For example, one new round hides the answers and then slowly reveals them. A new feature in Quiz World is player profiling and the host Buzz addressing the player by name, informing them of their abilities and record as a player. Buzz!: Quiz World also supports PlayStation Home rewards that are rewarded by winning the prize after a round of Buzz!: Quiz World. It supports full game launching for PlayStation Home as well. In late-March 2010, Sony and Relentless released a patch for Buzz!: Quiz World that added a feature to allow players to post to Facebook from within the game. According to the companies involved, this made the game the first in the world to offer such functionality. The patched Facebook features allow players to post details of the game session just played, including the in-game names of those who took part, and who won.