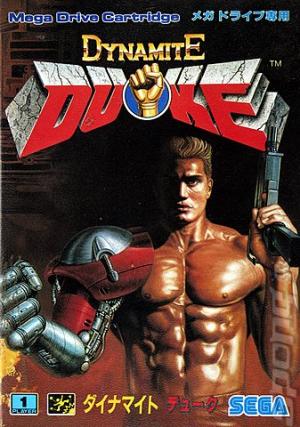 A top scientist decides to utilise a secret formula to develop his very own army of evil mutant warriors, so he can become ruler of the world. It is up to Dynamite Duke: a man who is armed with a cybernetic arm along with a machine gun. Dynamite Duke (Japanese: ダイナマイトデューク Hepburn: Dainamaito Dūku?) is a 1989 action arcade game developed by Seibu Kaihatsu. It was later ported to the Sega Master System, Sega Mega Drive and Sharp X68000. Being a Cabal-based shooter, it can be considered a follow-up to Seibu's Empire City: 1931 and Dead Angle.