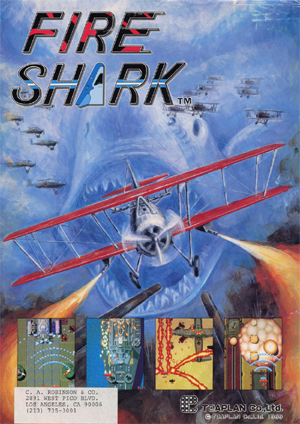 Fire Shark, released in Japan as Same! Same! Same!, is a 1989 shoot 'em up arcade game developed and published by Toaplan. The player controls a biplane and builds up a score by shooting a variety of military targets. It is considered the sequel to Flying Shark. One summer night in 1991, an enemy fleet known as the Strange Fleet approached a small island of the Mediterranean Sea. When it arrived, very few saw the Strange Fleet. Two years later, while the Stranger Fleet expanded itself, it created a world war. It is unknown by everyone around the world who noticed the attacks of the Strange Fleet. As the Strange Fleet continues their assault, many against them cried "Fire Shark! Fire Shark! It's time to take off!! Beat them for our sake. Go! Go! Fire Shark!"