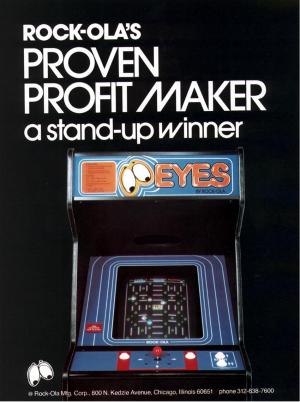 The player controls a hat-wearing eyeball in a maze. As in Pac-Man the goal is to collect all of the dots to advance to next level, but in Eyes you shoot the dots rather than eat them. Computer-controlled eyes chase and shoot at the player. Shooting a computer eye gives points and removes it from the level, but it will reappear a short time later. Being shot by a computer eye is fatal. As the game progresses, more computer eyes are added to levels and they take less time to shoot at the player. They also move faster.