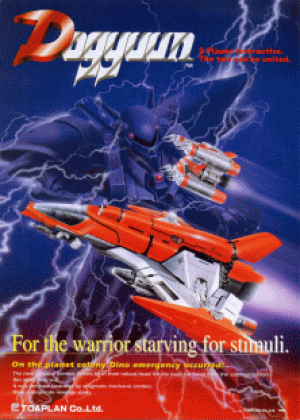 Dogyuun is an arcade Shoot 'em Up made by Toaplan in 1992. The plot is somewhat vague, except that it involves two pilots destroying aliens after an alien mecha kills the reconnaissance ship leading them. One interesting feature of the game is the ability in Co-Op Multiplayer for player 1 to combine with player 2, producing a larger ship with better firepower. The game also features loads of homing lasers and large bosses. It was also the first game to feature the astounding graphical designs of Junya Inoue.