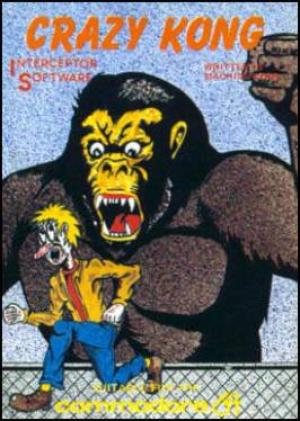 Crazy Kong is an arcade game created by Falcon, released in 1981 and is similar to Nintendo's Donkey Kong. Although commonly mistaken as a bootleg version, the game is officially licensed for non-US markets[1] and is based on different hardware. The game retains all of the gameplay elements of Donkey Kong, but has all of the graphics redrawn and re-colorized. Crazy Kong is also known as Congorilla, Crazy Kong Part II, and Monkey Donkey. There are two versions of the original Crazy Kong and Crazy Kong Part II; the differences of which are in minor cinematic artifacts and bugs, color palette choices and minor gameplay differences. Crazy Kong Part I shows no copyright or company name on the title screen. Crazy Kong (parts I and II) runs on modified Crazy Climber hardware. In addition there are other versions of the game that run on Scramble, Jeutel, Orca, and Alca hardware. The official versions of game came in two different stand up cabinets that featured a large and angry, rather than comic, ape embedded in the artwork. The cabinets were created by Zaccaria.