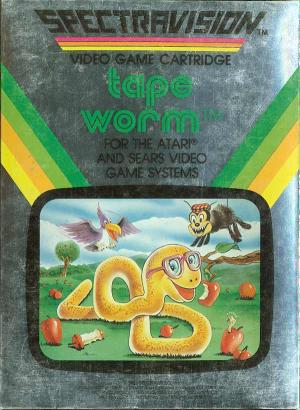 With Tapeworm, Spectravision gives a whole new meaning to the slithering slimes that people love to hate. According to the manual of the game, tapeworms live in bean patches, love to eat fruit and are preyed upon by other critters named Beeky the Bird, Spanky the Spider and Mystery Beetle. Uhhhh, right. Our hero here is Slinky, a tapeworm who's patrolling the local bean patch. In order for him to get to the fruit he loves, he has to slither around the screen eating up all the beans. He consumes them by touching a bean with his head (merely a yellow square), and by doing so, another bean appears somewhere else on the screen, and then you're off again. The more beans Slinky eats, the longer he grows. Which is a problem. As you steer the worm through the bean patch, you need to take great care not to coil him back over himself because, omnivore that he is, Slinky will eat himself. Don't tread too gingerly because while Slinky is hot after those beans, a beetle is moving across the bottom of the screen, outside the patch, bearing down on something you're supposed to believe is an apple (on later levels, different fruits take the apple's place.) Trust me when I say that it takes a great imagination to believe the block graphics resemble anything you'd find at a farmer's market. Anyway, if the beetle gets to the fruit before Slinky eats his bean, two more beans appear on the screen and Slinky has to eat them, too. Other predators include the Mystery Beetle, Beeky and Spanky. They bleep across the bean patch at random intervals. If they happen to touch Slinky's head, it's curtains for the worm. Taken as a whole, Tapeworm isn't too bad. It borrows elements from Atari's Surround and Rock-Ola's obscure Nibbler. But what where Tapeworm fails is in its presentation (i.e. - crap graphics) and unresponsive controls.