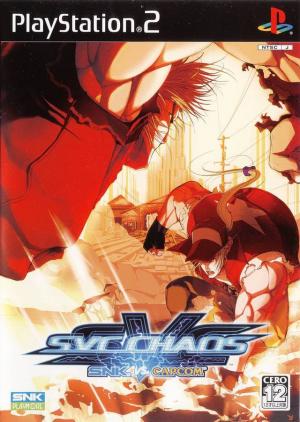 SNK vs. Capcom: SVC Chaos (エス・エヌ・ケイ バーサス カプコン エスブイシー カオス Esu Enu Kei Bāsasu Kapukon Esbuishī Kaosu?) is a 2003 fighting game produced by Playmore (formerly SNK) for the Neo Geo arcade and home platform. The game was ported to the PlayStation 2 and Xbox in Japan and the PAL region, although only the Xbox version was released in North America.[1] The game is a crossover featuring characters from SNK '​s and Capcom '​s respective fighting game properties such as The King of Fighters, Samurai Shodown, Street Fighter, and Darkstalkers. It was the third arcade game in a series of crossovers between these two companies (see SNK vs. Capcom series) and the only one developed by SNK (SNK previously produced SNK vs. Capcom: The Match of the Millennium for the Neo Geo Pocket Color).