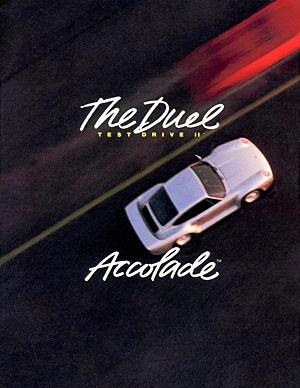 Like the original Test Drive, the focus of The Duel is driving exotic cars through dangerous highways, evading traffic, and trying to escape police pursuits. While the first game in the series had the player simply racing for time in a single scenario, Test Drive II improves upon its predecessor by introducing varied scenery, and giving the player the option of racing against the clock or competing against a computer-controlled opponent. The player initially is given the opportunity to choose a car to drive and a level of difficulty, which in turn determines whether the car will use an automatic or manual transmission—the number of difficulty options varies between gaming platforms. Levels begin with the player’s car (and the computer opponent, if selected) idling on a roadway. Primarily these are two to four lane public highways with many turns; each level is different, and they include obstacles such as bridges, cliffs, and tunnels in addition to the other cars already on the road. Each level also has one or more police cars along the course. The goal of each level is to reach the gas station at the end of the course in the least amount of time. Stopping at the gas station is not mandatory, and one could drive past it if inattentive. The consequence of not stopping results in running out of gas, and thus losing a car (life). The player begins the game with 5 lives, one of which is lost each time that the player crashes into something. If the player completes a level without crashing or running out of gas, then he or she is awarded a bonus life. In addition to losing a life, crashing adds thirty seconds to the player's time. Cars could crash into other traffic or off-road obstacles such as trees; they could crash by falling off the cliff on one of the mountain levels, or they could sustain too much damage by staying off the roadway for too long on the flatland levels. Players could also lose a life when using a manual transmission by redlining and consequently blowing the engine. Crashing into a police car instantly ends the game, regardless of the number of lives the player has left. Police cars appear in every level, and if the player is driving faster than the speed limit when encountering one of them, the police car will follow in pursuit. If at any point while being pursued the police car is able to pass the player’s car, the player is forced to pull over and receives a ticket stating the offense and the speed of the vehicle. While this doesn’t cost the player a life, it does take away valuable time. Players can avoid being pursued by police by slowing down before encountering them, anticipating them through the aid of a radar detector, which comes standard in all vehicles in the game.