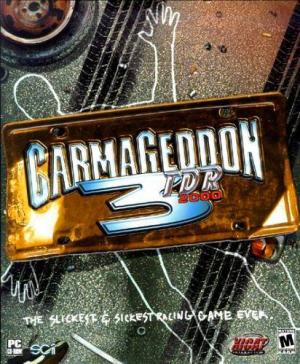 The best selling twisted racing game is coming at you again, with it's most amazing installment yet. Carmageddon 3: TDR 2000 is guaranteed to leave you sweating for more car-crushing, mutant-pulping excitement! The beginning of the new Millennium was like the last; only worse. The cities swelled with crime and greed. Misery and poverty spread like cancer. Seeking to escape this plague, the rich and powerful built defensive walls around their cities, and released their nuclear stockade into the unsuspecting masses. Now the survivors want revenge. It'll take a four-wheeling genius to cross that barrier. A person with killer instinct, no morals, and a suped-up death-mobile.