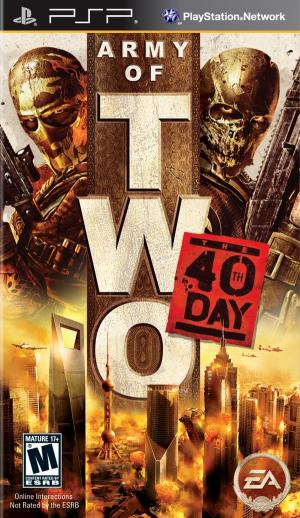 Army of Two: The 40th Day is a third-person shooter video game developed by EA Montreal and published by Electronic Arts for PlayStation 3 and Xbox 360. The game was also released for PlayStation Portable, which was developed by Buzz Monkey. It is the sequel to Army of Two. Army of Two: The 40th Day was released on January 12, 2010 in North America, on January 14, 2010 in Australia, and on January 15, 2010 in Europe. The 40th Day focuses on two-player cooperative play and employs a cover system. It features Tyson Rios and Elliot Salem, the two protagonists from the original game, as combatant partners who, with the assistance of their handler Alice Murray, must fight to survive and prevail over invading forces that have engulfed Shanghai, China in a devastating terrorist attack. A demo of the game was released on Xbox Live and PlayStation Network. A sequel to The 40th Day, entitled Army of Two: The Devil's Cartel, has been developed by EA Montreal and Visceral Games and was released on March 26, 2013.