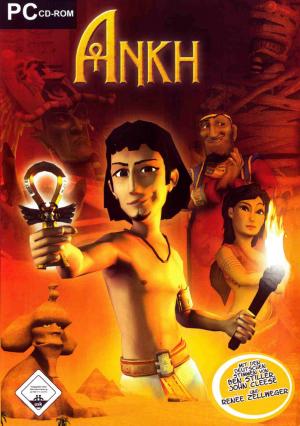 Ankh is a point-and-click 3D adventure game by Deck13 Interactive. It features a fully three-dimensional environment with cineastic camera movement. All content is fully spoken and the soundtrack reflects an authentic Egyptian atmosphere. Humor is an important aspect of the game, and the influence of classic LucasArts adventure games is noticeable. The player takes the role of Assil, the son of a respected architect in Cairo. Assil is a party animal but at some point one of his party-nights turned out sour. When he tries to have some fun in the pyramids with two friends of his, he accidentally breaks some urns and thus disturbs the mummy resting in the pyramid. The mummy punishes Assil by placing a death curse on him, and now he has 24 hours to remove the curse and save himself. Later in the game Assil meets the Arabian ambassador's daughter Thara, who is also a playable character. Requires a game patch which consists of an updated audio .dll file made for Vista to run on Windows Vista or Windows 7.