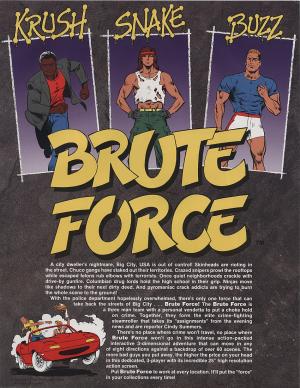 The streets are not safe anymore for law-abiding folk to walk and go about their business in peace. The police can't stop the gangs so you and two other friends have decided enough is enough and will try to stop seven gangs by finding and killing their leaders. The game is a beat-em-up and it is viewed from the side at an elevated angle. You start outside your shop for each level and following a set path you find and kill the leader of each gang while beating up thugs with your fists and feet or any weapons you find along the way. The screen scrolls in various directions when you move and there are various thugs with just their fists or various weapons like bats, guns and grenades. Some thugs when killed leave power-ups behind like invincibility, bombs or speed and you can pick up a weapon they were carrying. Three players can play on the screen at one time.