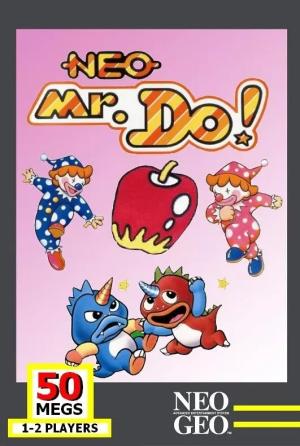 Mr. Do! (ミスタードゥ Misutā Du?) is an arcade game created by Universal in 1982. Similar in some ways to Namco's popular Dig Dug title, Mr. Do! was also popular and saw release on a variety of home video game consoles and systems. It is the first game in the Mr. Do series, and was released both as a standalone game and as a conversion kit (released by Taito Corp.) for existing arcade cabinets. It was one of the first arcade games to be released as a conversion kit, and went on to sell 30,000 units in the United States. It was remade in Japan as Neo Mr. Do! (ネオミスタードゥ Neo Misutā Du?). It was also a popular choice on the 1983 video arcade-based game show Starcade.