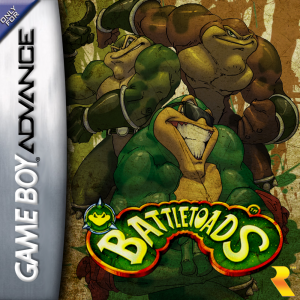 Battletoads is a unreleased title for the Game Boy Advance. The game's development never went past alpha state. The game would use pre-rendered sprites, much like the ones used in the Donkey Kong Country titles. The prototype only contains sprites for Rash, who was redesigned to use clothes, as well as the Psyko Pigs, redesigned Walkers with guns and Dragons. Only two stages are close to completion, the first being a remake of Ragnarok's Canyon and the second a sidescrolling ice cave similar to the Artic Caverns. Most of the remaining graphics in the prototype are placeholders.