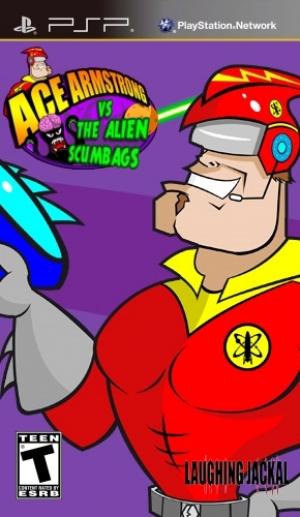 Ace Armstrong Vs. The Alien Scumbags!

Ace Armstrong vs. the Alien Scumbags! is a fast-paced horizontally scrolling shooter with a unique, slapstick take on the best of 50s and 60s sci-fi movies and cartoons. The game features a unique weapons system: instead of collecting power-ups, Ace must down enemies using the incredible power of the Recyl-o-Ray! before turning the Scumbags’ own weapons against them! The game sees our titular hero blasting into outer space to defeat a race of psychopathic cephalopod invaders intent on wiping Earth from the face of the galaxy: if the galaxy even has a face that is... Ace must speed across the surface of the earth, before blasting into space, speeding through a deadly asteroid field, taking on a Scumbag Factory Ship and defeating them on their home planet before blasting into the mysterious Dimension X to put an end to the Scumbag menace once and for all! (phew!)