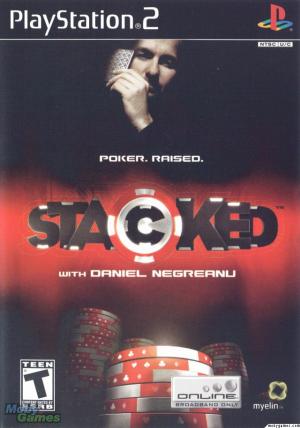 Myelin Media's STACKED WITH DANIEL NEGREANU is a Texas Hold ‘em game for the PS2 featuring rising poker star Daniel Negreanu along with six other up and coming card players. The AI for the game is brand new and subtly increases the difficulty as players advance. The career mode of STACKED WITH DANIEL NEGREANU is set up to increase player's Texas Hold ‘em skills. The AI is completely new and works with the player, slowing increasing the opponents' prowess and game-playing ability as the player gets better. Career mode, of course, is all about becoming the best card shark out there, and the game's AI makes this possible. In addition to career mode, players can also participate in a tutorial with Daniel Negreanu and play online against other players. Special STACKED tournaments are planned that will have players competing against others across the nation for various prizes. Additionally, players can hold their own tournaments either against friends or online. Poker players looking for a portable poker game should look no further than STACKED WITH DANIEL NEGREANU. The game's impressive AI, all-inclusive tutorial with Daniel Negreanu, and tournament options are all great features.