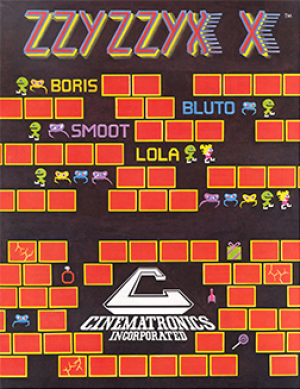 The object of the game is to guide the hero, named Zzyzzyxx, through a moving maze of bricks to collect gifts and bring them to the fair-haired Lola, the object of his affection. Zzzyzzyxx is opposed by the evil Rattifers, named Boris, Bluto and Smoot, who will try to intercept him as he makes his way through the maze. Zzyzzyxx can collect a helmet in the maze, which can be used to imprison a Rattifer inside a brick, or to break a brick in the row above to move through the maze. As the levels progress, Zzyzzyxx must avoid crumbling bricks, rising missiles, and dropping bombs. The game has a 1up player score and laps tallied at the top of the screen.