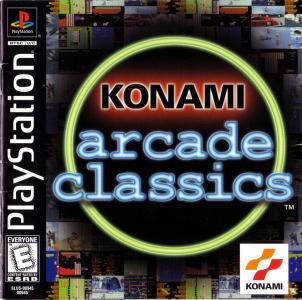 This game is a compilation of old Arcade video games made by Konami and was released originally in japanese Arcades as "Konami 80's Arcade Gallery" in 1998. It was later ported to the Japanese PlayStation in 1999. The compilation was also released in North America, first in Arcades as "Konami 80's AC Special", then on the PlayStation as "Konami Arcade Classics". It contained 10 games: Pooyan, Scramble, Yie Ar Kung-Fu, Roc'n Rope, Shao-lin's Road, Circus Charlie, Super Cobra, Road Fighter, Time Pilot and Gyruss. Each were released between 1981 and 1985. This PlayStation version was not released in Europe or Australia but both regions did get the Arcade version.