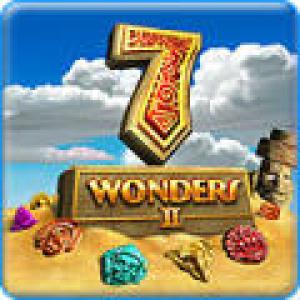 7 Wonders II is the sequel of 7 Wonders of the Ancient World, a casual match-3 game. The gameplay consists of swapping adjacent runes on a grid, making matches of three or more to remove them. By doing so, the remaining pieces fall down, occupying the vacant space. The player has a limited time to reach his objective of breaking the background stone by doing matches. In 7 Wonders II, the bricks resulting from this breaking are used for replenishing the bonus bar in order to use it. The bonus can be chosen on the bonuses menu by the player. These appear on the Wonder and can be reached with construction sets. The construction sets come from the matches: the more matches that are done, the more the construction set bar is replenished. Use what is collected to build the Wonder and find bonuses. Matching four runes will cause an iceball to appear. By swapping it, all the runes and background stone of the same line will be destroyed. The fire ball appears after a five-runes match, and destroys both a column and a row. The dice piece appears after using several ice and fire balls, and removes random tiles from the grid. A secret Wonder is unlocked by collecting the 7 "big" map pieces. In each level, a special square can be seen. By matching runes of the same color on it, you can obtain a "little" map piece. When you obtain a certain number of it during the construction of your Wonder, you'll unlock secret challenges and obtain a "big" map piece.