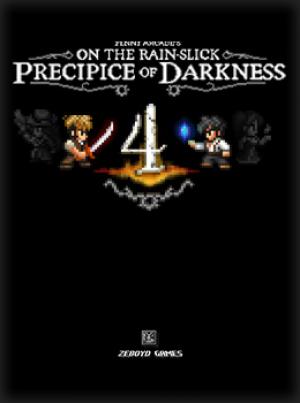 Penny Arcade Adventures: On the Rain-Slick Precipice of Darkness, Episode 4

After the happenings of Penny Arcade's On the Rain-Slick Precipice of Darkness 3, the apocalypse happened and the world is gone. The protagonists wind up in Underhell and have to find a way to make things right. There are two groups (Gabe/Dr. Blood and Moira/Jim) and the control switches regularly between them during the course of the plot. The dialogues are humorous. Like the predecessor, the presentation is based on 16-Bit JRPGs. The combat system uses the turn-based system in which all participants face each other and chose their actions, e.g. using skills or attacking, from a menu. However, there is a small delay between choosing the action and actually performing it which can be used to interrupt it with the appropriate skill. The main difference to the predecessor is that the protagonists don't fight themselves but use monsters which are picked up along the way. Battles are initiated by running into enemy sprites; there are no random battles.