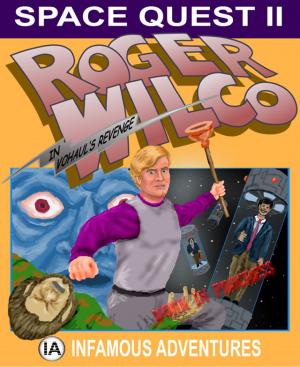 Infamous Adventures is proud to present a remake of Scott Murphy and Mark Crowe's classic 1987 hit, Space Quest II: Vohaul's Revenge. Feature: - Over 4000 lines of spoken dialogue. - All backgrounds have been redrawn to match the style of later games in the series. - Enhanced close-up cut-scenes and dialogue pictures help immerse you into the second episode of the3 classic space-faring series. - Original music by professional music composer. - Re-experience the adventure with a stunning new interface (no more typing) and if you've never played this amazing game before, you'll discover a whole new world at your fingertips. The Story: Heroes come and heroes go, and our favorite janitor/hero, Roger Wilco, finds that life sucks. Again. Roger's life has returned to normal after the events in Space Quest I: The Sarien Encounter. Transferred to the Xenon Orbital Station 4 and promoted to head (and only) janitor, life is quiet until he is abducted by Sludge Vohaul, the evil mastermind behind the original Sarien attack of the Arcada. As Roger is being transported to the Labion labor mines as punishment for thwarting Vohaul's original plan, the prison ship crash-lands in a nearby jungle upon the planet. Once again, it's up to Roger to save the day, this time by stopping Vohaul's evil plan: to eradicate sentient life from Xenon by launching millions of cloned insurance salesmen at the planet.