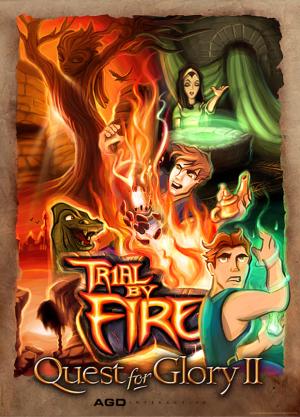 Quest for Glory II: Trial by Fire is a remake of the earlier game game of the same name. It features 256-color VGA graphics (as opposed to the original's 16-color EGA) and an icon-based interface very similar to that of the third game. All the original locations, dialogues, and gameplay elements have been preserved. Though the interface is mouse-based, the player still has the options of choosing topics during conversations by typing them, along with selecting them from a menu. The remake features additional dialogue options and easter eggs connected to subsequent installments of the series. There is also an option to simplify the maze-like layout of the town Shapeir; the street names in the town are displayed when highlighted, allowing easier navigation. Combat preserves the available commands of the original version, adding the possibility of advancing and retreating on the battle screens. Another new feature is the option to set battles on auto, customizing the hero's actions.