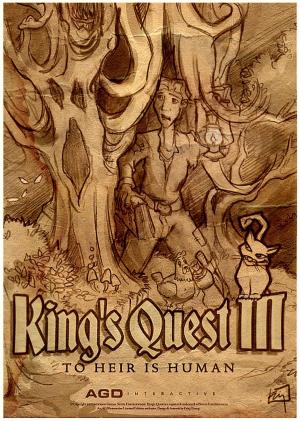 King's Quest III Redux is an enhanced remake of Sierra On-Line's original game from 1986 in a similar vein as AGDI's earlier remakes of King's Quest I and II. As with Infamous Adventures' previous King's Quest III remake, this remake features completely redrawn background artwork, a modern icon-based point-and-click interface, a professional music score and voice acting throughout, including appearances by Sierra pioneers Josh Mandel and Lori Cole. This remake does not aim to be a 'true' remake, however, as it includes additional content that does not appear in the original game, such as an illustrated control bar, new side quests, puzzles, and characters. Additionally, some puzzles have been tweaked to make them less punishing for the player. The story remains the same as in the original game on which it is based. As an infant, prince Alexander is kidnapped by the evil wizard Manannan. The wizard raises him as Gwydion, never revealing the boy's true heritage, and forcing him to do menial chores around the house. The boy grows into a handsome young man and his adventurous nature starts to get the better of him. The player must help Gwydion escape the wizard's clutches, explore the land of Llewdor, and discover his true destiny. But, beware; Gwydion's master is not one to play games and should he ever think Gwydion would turn on him, he would be most unforgiving.